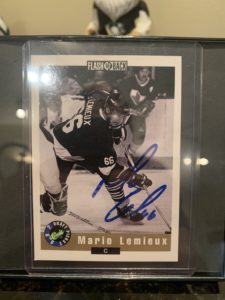 When I was in second grade, our teacher, Mr. Conway, had all of us students write a letter to someone we admired as a local hero. I suggested Mario Lemieux, and fortunately, the class agreed. The year was 1994 and Mario Lemieux had just helped lead the Penguins to back to back Stanley Cup championships in 1991 and 1992.

This act, in-and-of itself, is perhaps not the most heroic thing in the world. It’s awesome and it’s an incredible accomplishment – it’ll certainly win you the admiration of a lot of second graders and Pittsburgh sports fans – but it retrospect, playing hockey at the highest level is not alone when makes one a hero.

What does, however, is having great character.

In 1994, Mario Lemieux was actually NOT playing hockey. Rather, he was out for the entire season due to Hodgkin’s Lymphoma.

For those who may not be familiar with the disease, Hodgkin’s Lymphoma is a type of lymphoma (a swelling of the lymph nodes) in which cancer originates from specific white blood cells called lymphocytes. Symptoms include fever, night sweats, and weight loss. Treatment includes chemotherapy and radiation treatments.

So anyway, we as a class all hand-wrote him letters. Some time goes by and we all collectively move on to third grade. It’s my first day of third grade and my former teacher, Mr. Conway, excitedly approaches me and hands me a card! It’s a Mario Lemieux signed card that he sent all of us as a token of his appreciation for our letters!

I was ecstatic! To this day, it is my most prized sports card and I keep it prominently displayed in my office for all to see.

That, my friends, is the character of a hero! As he’s going through lymphoma treatment, Mario took the time to respond to a group of second graders who wrote him a letter! Oh, and by the way, the following year he came back to hockey and won both the Hart Trophy and scoring title!

Why Have Traditional Staff Meetings When You Could Have Them on the Disc Golf Course Instead?

Why Have Traditional Staff Meetings When You Could Have Them on the Disc Golf Course Instead?