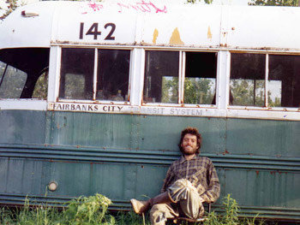 A Professional Therapists Take on the Subject

The clinical indicators are there: Male. Early 20’s. Life stressors. Even more so: Third person references. Pseudonyms. Vague journal entries. Poor hygiene. Drifting and isolating. These are all indicators of first break potential.

So was Christopher Johnson McCandless, protagonist of the book and movie, “Into The Wild,” psychotic?

Many professional therapists would argue so. I, however, am not so sure.

My journey into this question, an introduction to Christopher’s story, started almost precisely 15 years ago. It was 2005 and the book “Into The Wild” was first recommended to me by my college guidance counselor. She said I reminded her of the main character.

At the time, 18 year-old me rocked long hair and tie-dye shirts. I fancied myself a rebel against society’s norms and fell in love with Bob Dylan music, 60’s counterculture, pot, and acoustic guitar.

I was also prone to a lot of poor and impulsive decision making. Needless to say, like many who admire Chris’s story, I was a fan of Alexander Supertramp.

Fast forward 15 years and I’m now a professional therapist. I’m a licensed clinical social worker, a father, and a significantly more responsible adult.  I’m still a fan of Christopher and his courage, but now I’m left wondering, was he psychotic?

In the words of Yanni M., a fellow professional therapist:

The movie misrepresents, perpetuates, and glorifies “the real danger of these subclinical forms of psychosis…they often go undetected and untreated. It’s easy to ignore them, deny them, romanticize them…but the unfortunate reality is that they can have such sad endings.”

He goes on to say…

“His ideas led him to his death and his ideas recall were far from ordinary. That’s almost the textbook definition of delusional thinking; false ideas about reality impairing functioning.”

The sad truth is…

“Often parents and families tend to be in denial or live in ignorance. You have to bear in mind that in the literature of untreated psychosis there may be cases where the onset was even 8-10 years before the diagnosis. Such patients have families who become really alarmed only in life or death situations. These psychotic patients sometimes take a while before they have such a crisis…and sometimes it’s too late.”

So, was this the case for Christopher?

Being in one’s early 20’s is a common time for a first psychotic break, but it’s also the most common time that young men make poor or impulsive decisions in general. The prefrontal cortex, or PFC, only fully develops in people by age 25 or 26. This is when we gain our full potential capacity for empathy and thoughtful decision making. (It’s also why car insurance rates go down at this age!) For Christopher, his brain had not yet hit this fullest stage of development (he died at age 24).

When I initially read the book, I never would have thought him psychotic in the slightest. Just someone with different values from the majority of society. He is at best eccentric, living on the edge. Having different worldviews and choosing a very different way of living your own life does not qualify one for mental illness.

For me, I simply saw Christopher as a rebel personality (see Gretchen Rubin’s *non-clinical* 4 tendencies of personality: upholders, obligers, questioners, and rebels) and not psychotic, but just the least common type of personality. When you dive deeper in to his upbringing, as reported by his sister, this rebellion seems even more environmentally induced.

It’s challenging from a therapeutic lens because…

We have to be careful that when you’re a hammer, not everything looks like a nail!

The only honest conclusion is this…

The world will never know the answer to this question.

Even if we could interview everyone who ever knew him, our memories are biased. Our reports of our “truth” do not always represent the “truth”.

It is possible he had some level of undiagnosed psychosis. It’s also possible that he was just a rebel, only a very unique one with the courage to follow his own path and walk to the beat of his own drummer.

If I were a college professor, this movie and discussion would certainly be taking place in my classroom – and I’m glad we could have it here! Thank you for reading.