Life Out of Balance: Howard’s Story

LIFE OUT OF BALANCE: HOWARD’S STORY 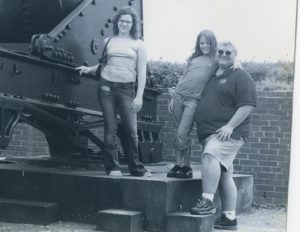 Howard with his two daughters in his late 40’s

During college, I ran cross-country. However, like a lot of young guys, my eating wasn’t healthy. I ate a lot of junk foods and sweets, but with a twenty year old’s metabolism, and a routine of running a good number of miles every day it didn’t seem to matter, and my weight wasn’t a problem.

After College there were years of grad school, marriage, the start of a new career, and children that came along. Somehow, I no longer had the time to run, however I did have the time to eat. Some people eat out of stress or depression, or boredom, but I mostly ate as a reward. I would say to myself, “You are working two jobs, trying to be a good husband, a good father to three girls, you’re always doing something for someone else, food is the one treat you give yourself.”

Slowly, over time, a healthy-life balance began to get more and more askew. Instead of a healthy balance between work, family, spirituality, leisure, eating and exercise. I began to place too much emphasis on some areas (mainly working and family). As I did more and more for others, I did less and less for myself. Skipping meals, no exercise, not taking time to eat a balanced breakfast or lunch was replaced by pigging out in the evening. I told myself that the cookies, chips and junk I was eating was a reward for all the hard work I was doing. I convinced myself that eating was the one thing that I was doing for me, and I deserved it.

The problem was that instead of doing these things for me, I was actually doing these harmful things to me. I thought I was rewarding myself, but what I actually was doing was punishing me. I was slowly killing myself, and the excess weight made activities that I previously enjoyed (running, hiking, even active play with the kids) impossible. The less I could partake in healthy activities, the more appealing the food became. It became appealing because it was easy, and because the other activities I could do was limited. One time at the local amusement Park, Kennywood, I had to leave the rest of my family on the Kangaroo ride and exit, because the attendant couldn’t get the bar closed over my stomach.

My family and friends were concerned about my health, but I felt hopeless and powerless to change. If I couldn’t lose 10 pounds, how in the world could I ever lose the 150 pounds that I needed to lose? My wife finally said to me, “I know you would never walk out on your family, but if you die of a heart attack, I’m just as much a single Mom as the woman who’s husband abandons her. And I didn’t sign up to raise these three girls alone.”

That got me thinking. I didn’t want to die, I wanted to live life, and I wanted to be able to grow old with my wife and see my girls grow up. So I prayed, “God, help me want, to want to do something.” The first step for me was to realize that I had so completely given up hope, that I wasn’t sure I even wanted to try. I prayed for God to give me the desire to do something.

Sometimes you need to step back and put your life into perspective. When I did this, I realized that my life was out of balance. My relationship with food was killing me, and I needed to make some major changes to get life back to a healthy balance.

I started by making some little changes. I went to the gym. The first day I walked on the treadmill for 10 minutes. Just being able to walk  into the gym was a victory for me, because I was embarrassed to go. I was worried about what people would think. Spoiler alert: If you’re heavy and embarrassed to go the gym, go ahead and go—no one is watching.

So I started exercising, slowly at first, but adding to my workouts little by little. And I started to eat better. I tried to cut out the large amounts of junk food and sweets, and replace them with lean protein and more fruits and veggies.

The weight loss was slow. It took me two years to lose 150 pounds. Sometimes it was discouraging that it took so long. But I kept thinking of my goal, that I wanted a healthy, balanced life.

I was blessed with many encouraging friends and family. At the time I lost the weight, I was working  in a program as a social worker. There were nurses and dietitians there who shared their knowledge and encouragement with me. And I daily prayed for the strength to continue along the path and not get discouraged.

Now that I am at a healthy weight, I can honestly say that now life is more meaningful and happy. My life is in a good balance, and I can enjoy my family, friends, work, and even food in moderation. Exercise is not a chore, but something that I enjoy doing. It has become a way I connect and spend time with my friends. I can honestly say now, that the work to make changes is worth it. 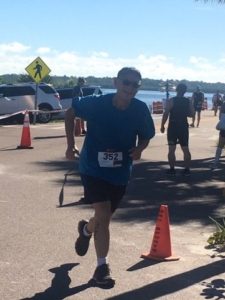 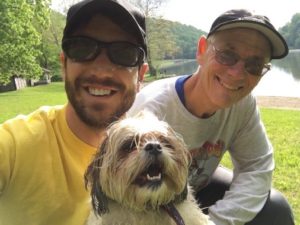 Howard, Sierra and me out for a hike at Brady’s Run.

I am incredibly proud of his story and thankful for his friendship! 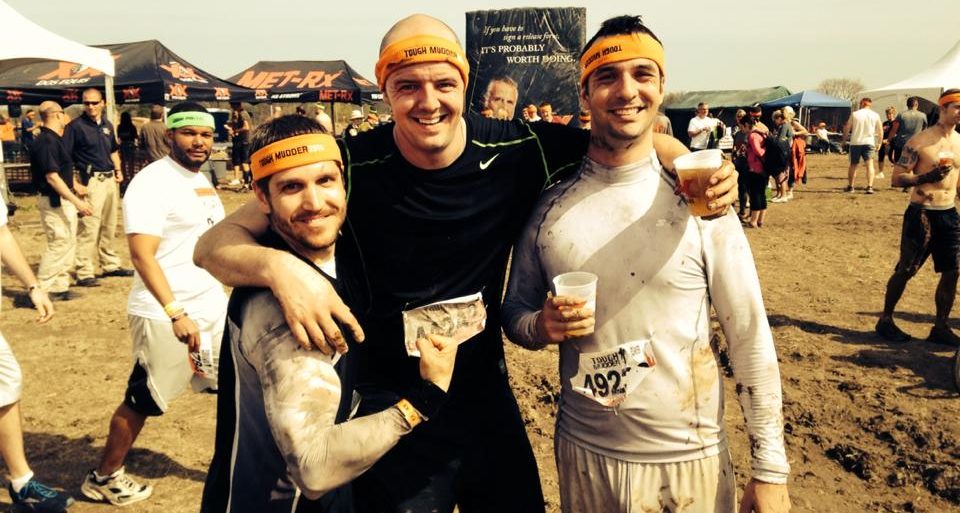