Stress is a natural reaction to threatening situations in life. Often, it kicks in our primitive “fight-or-flight” reflex leading us to believe we have only those two options. This common misconception is not only not true, it can be downright dangerous.

Taken at face value, stress makes our thinking more myopic. The trouble here is that by getting sucked in by our stress, often we miss the creative solutions to our problems we may have seen from the proverbial 10,000 foot view.

To illustrate this point, I’ll provide two real-life examples: one from former U.S. President, John F. Kennedy. The other, from entrepreneur and inventor, Joy Mangano.

In my book, Mental Fitness, I mention three Rethink Strategies for Stress. For the purposes of this blog post, lets call this…

The best example of thinking creatively under stress comes from  our former president John F. Kennedy and Cuban Missile Crisis of 1962. The Cuban Missile Crisis was a 13-day confrontation between the United States and the Soviet Union  from October 16–28, 1962 concerning Soviet ballistic missile deployment in Cuba. It was televised across the globe, and it is generally regarded as the closest this world has ever come to a full-scale nuclear war.

As President Kenedy discussed response options with his Joint Chiefs of Staff, they unanimously agreed and advised that a full-scale attack and invasion was the only solution. Kennedy, however, was skeptical. 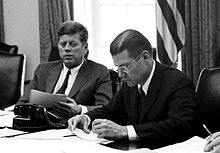 President Kennedy and Secretary of Defense McNamara in an EXCOMM meeting.

Not wanting to act impulsively and risk starting World War III, Kennedy looked to his brother Robert for some advice. After speaking with his brother and considering all possibilities, Kennedy decided that he would have the U.S. Navy form a blockade around Cuba first, before launching a missile strike. This would prevent further missiles from entering Cuba. At the same time, the U.S. also demanded that the weapons already in Cuba be dismantled and returned to the USSR.

This strategic chess move on the part of the U.S. essentially forced the Soviet Union to make the next move. Collectively the entire world held their breath and prayed for the best. After almost two weeks of the most nerve wrecking periods in United States history, the blockade worked and an agreement was reached between President John F. Kennedy and Premier Nikita Khrushchev.

For more details on the events leading up to and the resolution of the Cuban Missile Crisis, check out this link: https://en.wikipedia.org/wiki/Cuban_Missile_Crisis

Fifty years after the crisis, Graham Allison wrote: “The Cuban missile crisis brought the world to the brink of nuclear disaster. The resulting war might have led to the deaths of 100 million Americans and over 100 million Russians.”

So what’s the point of this story and how does it relate to taming stress? What would have happened, if JFK reacted to stress by being myopic in his vision, and impulsive in his actions? We very well  could have experienced World War III and may not be here today. Fortunately, he was thoughtful and creative.

But what if the future of the free world isn’t hanging upon your need to think creatively and fight stress? To illustrate this point of overcoming daily stressors by using creative thinking, let’s look at the story of Joy Mangano.

Joy Mangano with her invention, The Miracle Mop

Joy Mangano may seem like a typical single mom. She was raising her three children after a divorce from her husband. She worked a variety of jobs like waitress and airline reservations manager, and then came home to feed, clothe, and take care of three kids. As anyone who has multiple kids knows, cleaning up after children is a never-ending job. While cleaning up one mess, two more are created. It’s dirty, monotonous, and thankless.

Many single parents get discouraged with the burden of cooking, supervising, and cleaning up after multiple kids. After working a full day and taking care of three kids at night, Joy could have sunk into bed feeling stressed and overwhelmed. But Joy turned her frustration of having to mop up dirty floors into creativity.

She realized traditional mops didn’t clean floors well, and had to be wrung out by hand. What if she could develop a product to make a grimy, time-consuming job faster, and less messy? On her website joymangano.com, she explains, “I’ve always wondered why ordinary things in life need to remain ordinary?”

Joy came up with the idea of the self-wringing Miracle Mop in 1990. Her self-wringing plastic “Miracle Mop” was made from a loop of 300 feet of cotton that could be easily wrung out without getting one’s hands wet. She used her life savings, and borrowed enough to make a prototype and produce 100 mops. She sold it in some trade shows and in local stores, then, she was able to sell 1000 mops on consignment to QVC. The mops didn’t sell well at first, but she believed in herself and convinced QVC to let her pitch the mops on-air herself. She then sold 18,000 mops in less than a half hour.

Since that time, Joy has founded her own company, which has featured her multiple inventions. Her life was even the inspiration for the 2015 movie Joy, staring Jennifer Lawrence. She says on her website, “Here’s my little secret: This isn’t my work, it’s my passion, and that is how I find joy. Every day…”

In conculsion, the next time you’re feeling stressed, perhaps think of JFK and Joy.  Take a step back from your situation and ask yourself: “Is there a creative solution to my problem?” You’d be surprised what you might discover!